On July 10, 2013, Cummings Moving Company helped move all of the items from my mother’s apartment in San Mateo, CA.  There were several extraordinary things that happened during this move…

It was not until July 8 that I was able to confirm the date of the move, and when I contacted Cummings, they were able to do the move.  That is only 2 days notice.  They showed up with all of the moving eqmt, 4 men, and a large truck.

Since my mother lived in a senior residential facility, there was a certain protocol to be followed, which included having a shuttle truck (or van) so that the furnishings did not go out the main lobby and front door of the residential facility.  It was extraordinary to me that Cummings had all of the people and equipment available on such short notice, and on the day of the move they were on time.

The teamwork was very friendly and efficient.  Cesar stayed with the entire move, as there were drop-off in Foster City, Los Gatos, Napa Valley, Sugar Bowl, and Truckee, CA.  This made it easier that there was one person that stayed with the entire move since he was familiar with the items.  We were glad to have purchased the extra insurance since one item was damaged, and Cummings took the item with them to be repaired.  I would recommend Cummings for anyone. Emails from Our Clients

END_OF_DOCUMENT_TOKEN_TO_BE_REPLACED

We felt fortunate to be in such good hands! Ricardo, Ishmail, and Marty were excellent at providing council and helping us get everything packed and loaded into the truck. Honestly, it looked to us as though not a single molecule of space remained in the Cummi… END_OF_DOCUMENT_TOKEN_TO_BE_REPLACED

The crew was excellent.  They were careful and considerate.  We would use Cummings again if we had to move.

We want to express our gratitude as we continue to marvel at your superior moving services and our experience with Cummings Moving. Your company came highly recommended to us by a company that uses you frequently so that certainly set the stage for a good rela… END_OF_DOCUMENT_TOKEN_TO_BE_REPLACED

Your moving crew was great — Polite, helpful, and not a wasted moment, coming in $300 under estimate for time.  I would certainly recommend you to anyone planning a move.  Thanks to them for their good work.

What an awesome team. I can’t say enough about this company. They have great customer service and support. I have used them twice. The second move was quite complicated. It  involved multiple locations, donations, packing and crating valuables. From star… END_OF_DOCUMENT_TOKEN_TO_BE_REPLACED

The entire experience was great – from the quote with Enrique to the moving day with the crew. Everyone was so professional and efficient. We will definitely recommend you to anyone we know who needs moving services and will keep you in mind if we ever need to… END_OF_DOCUMENT_TOKEN_TO_BE_REPLACED

We were very impressed with our experience with Cummings. The crew arrived promptly at 8:30 and immediately started working. They worked efficiently and were very thorough about what we wanted to move and which items were not being moved. They were friendly an… END_OF_DOCUMENT_TOKEN_TO_BE_REPLACED

I want to thank you once again and offer kudos to all those who were involved in my most recent move. As all of you know, this last move was my 5th within 6years. And I have used Cummings each and every time! And, even though this last move was with a lot l… END_OF_DOCUMENT_TOKEN_TO_BE_REPLACED

Awesome! Super great to work with. Made our move so easy!

Thank you for completing our move from Brisbane to Bakersfield yesterday. Your crew was on time, courteous, professional. They made the experience easier! We will certainly recommend you to friends! 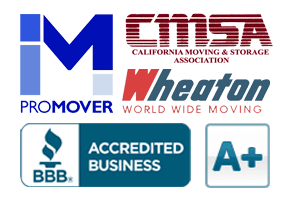 “As owners, we are hands-on. Our ability to deliver excellent service as San Francisco movers comes from our commitment to both customer and employee. Through regular training, supervision, competitive compensation, daily attention to excellence, and deep care for our customers and their belongings, we create an environment where top-level service is second nature."

San Francisco is our home. Moving residents and businesses is our passion. Your great experience with us as San Francisco movers is our aim - Every Day.
-Amy Messinger & Enrique Palos

Since 1969 - Serving San Francisco
and the Bay Area